The 3rd International Conference on GCED: Sustainable and robust platform for GCED 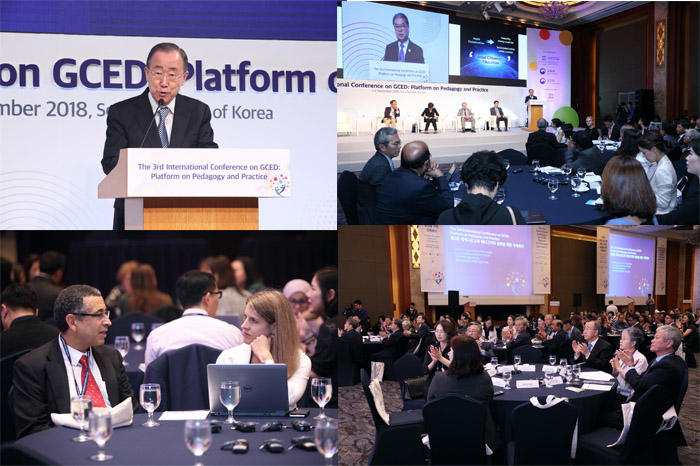 Since Global Citizenship Education (GCED) has been inscribed in Target 4.7 of the Sustainable Development Goals, it gained international attention as an imperative education agenda. In response to the ongoing demand for exchanging international, intensive, professional and practical information regarding GCED, APCEIU has been organizing the International Conference on GCED annually since 2016, in order to gather a wide variety of stakeholders of GCED from all over the world.

Co-organized by APCEIU, the Ministry of Education and the Ministry of Foreign Affairs of the Republic of Korea, in partnership with UNESCO, the 3rd International Conference on GCED: Platform on Pedagogy and Practice was held on 5-6 September 2018 in Seoul, Republic of Korea. Under the overarching theme of ‘GCED in Every Corner of the World: Local-Contextualization of GCED’, the Conference intends to touch upon how GCED has been and or can be perceived differently based on the local, national and regional contexts. The Conference explored and shared regional, national and traditional concepts which address same or similar values to those that are at the core of GCED.

During the two-day Conference, more than 600 educators, policy makers, scholars and youth representatives from 63 different countries had attended. Park Chun-ran (Vice Minister of Education of the Republic of Korea), Cho Hyun (2nd Vice Minister of Foreign Affairs of the Republic of Korea), Ban Ki-moon (the 8th  Secretary-General of the United Nations), Leonor Briones (Secretary of Department of Education of the Philippines) took part in the Conference.

This Conference attempted to provide interactive sessions which encourage participants to actively participate in, consisting of various plenary sessions and concurrent sessions. The plenary sessions intended to give an integrated overview on the theme of the Conference, while the concurrent sessions were comprised of diverse programmes such as panel discussions, case presentations, participatory workshops, theatre and TEDtalk-style speeches.

The first day of the Conference was initiated by a keynote speech by Moon Chung-in, Special Advisor to the President for National Security and Foreign Affairs, under the theme ‘Localizing Global Citizenship Education: Challenges and Tasks’. The importance of GCED and its localization through networking and solidarity were discussed through the example of GCED textbooks developed by Gyeonggido Office of Education.

The plenary session 1 was a panel discussion which brought together a panel of experts and from respective fields. Entitled ‘GCED in the context of the Korean peninsula—its contribution to peacebuilding and reconciliation efforts’, the panel discussion explored the relevance of the notion of GCED in advancing the principle of “learning-to-leave-together” in the Korean context. The panellists discussed the importance of unification education, the understanding of clear division of the two Koreas in the way of perceiving the concept of peace, and the successful example of German-French, German-Polish joint compilation of history textbook.

The plenary session 2 took the format of a town hall meeting in which all the participants exchanged their perspectives with the GCED experts from Senegal, Colombia and Philippines. The participants shared their views and ideas through question-and-answer session which aimed to raise awareness among participants about the diverse forms and expressions of GCED that exist around the world and how its core values are reflected in education systems.

In the concurrent session 1 titled ‘Do classrooms respond to the local realities?’, the participants discovered how GCED has been practiced in teacher-training programmes. Also, this session touched upon the comparative studies on GCED in the system of formal education in Korea, Japan and China and GCED integrated curricula responding to local contexts based on the cases from Cambodia, Mongolia, Uganda and Colombia.

The plenary 3 was led by a brief performance that embodied an ethos of global citizenship. The performance entitled ‘GCED Play – Here, hear’ was given by the Philippine Educational Theater Association (PETA). The session was designed to provide hands-on experience wherein the audience can feel the importance and message of GCED through the medium of theatre by creating different sounds. 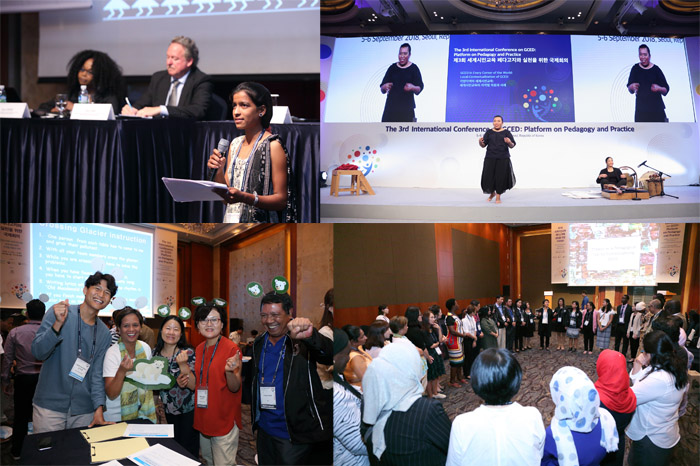 The second day kicked off with the plenary session 4 called ‘GCED Talks’. The speakers shared their genuine stories about the power of GCED transforming lives by introducing the cases of ‘Chocotogo’ cooperative promoting community-centric efforts, and advocacy activities of ‘Global Citizen’ using online platform and social media to mobilize the youth around the world.

The concurrent session 2 was composed of three sessions under the theme of ‘It takes a village to raise a child as a global citizen’. One of the sessions took the format of policy talk based on the APCEIU’s publication, 『GCED: A Guide for Policymakers』. Also, in a different room, the participants were able to learn about the transformative power of GCED by introducing women/youth-led and community-based practices in India, Philippines and Costa Rica. In another session, a participatory workshop facilitated by the Suseong-gu Office invited participants to engage in an exercise based on a scenario of a polar bear cub and his attempt to find his lost mother using different props, followed by a video of destruction of the earth by humans. The key message of these activities was that even small things can have an impact to change the world.

Lastly, comprised of distinctive three sessions, each session in the concurrent session 3 addressed ‘today and tomorrow of GCED’. One of the sessions delivered the added-values of ICT in GCED as ICT can facilitate the GCED pillars of cognition, socio-emotional connection and behaviour. Participatory workshops of drawing comics and playing theatre for transformative pedagogy were conducted in parallel.

The 3rd International Conference on GCED provided a global platform for exchange, interaction and dialogue on GCED, acting as a bridge between the countries across the globe in implementing GCED.

You can find the original article at:

The highlight video of the conference can be found at :